the hours of work

The struggle for the ten-hour day, more than any other issue, was the focal point for many workers organizations in the 1840s. By 1845, factory workers in Lowell were spending an average of 12.5 hours per day performing dreary, exhausting work in onerous conditions. When the time spent going to and from the mills was factored in, the days approached 14.5 hours.

The long hours worsened the already physically and mentally debasing factory life. Operatives wrote that the hours of work were “sufficient to impair health, induce disease, premature old age, and death...to say nothing of the intellectual degeneracy which must necessarily result from the want of mental recreation.” Many were so worn out by their work that they were unable to take advantage of the wealth of educational opportunities offered in Lowell. 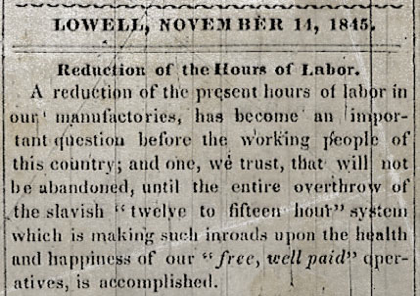 A note about the hours of labor published in the Voice on November 14, 1845.

The Hours in Lowell

The Manufacturing Establishments of New England

If Corporations had Souls

One Step, Towards the Great End

Standing at the Gate

The Petition and the Committee Report

The system of long hours was embodied in the factory bells, gates and public clocks that the mills used to regiment the workday. The system of bells established new, industrial work rhythms that synchronized Lowell’s workforce. The bells woke the operatives up, called them into the mills; they rang at breakfast, called them back into the mills, again at lunch, at closing time, and finally at curfew (this Timetable from 1851 marks out some of these bells; this poem called “The Factory Bell” is also illustrative). 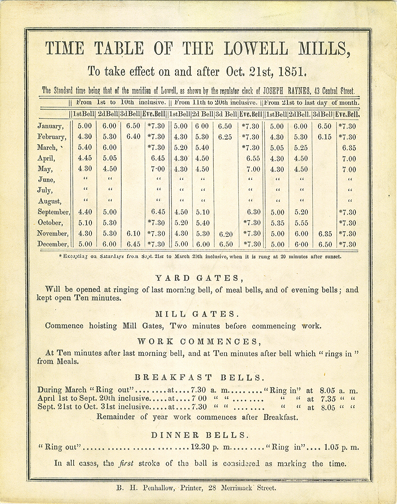 A “Time Table" of one of the Lowell mills, “to take effect on and after Oct. 21st, 1851." This timetable does not list all of the bells that the women might have heard throughout the day.

In order to succeed, ten-hour workday initiatives required legislative action, making government and the political process part of reform discussions for the first time. Workers organized several petition campaigns demanding laws that limited the workday. In Lowell, women led these efforts. Although earlier petition efforts found little traction, in 1845 the Voice of Industry spearheaded a vigorous campaign  that collected over 2,000 signatures (mostly from women). This effort led to the creation of a House of Representatives committee to investigate factory conditions, the first such committee in the United States. The committee was led by William Schouler, an appointment that dismayed many of the activists who had run the campaign. As the editor of a factory-friendly newspaper called the “Lowell Courier,” Schouler was perceived as being biased in favor of the corporations (his newspaper was often described by the Voice as a “political organ of the corporations.”)

The committee heard testimony from a number of women who spoke about the dreary work and long hours in the mills. Despite this, it opted not to intervene. Indeed, the committee’s report, reproduced here, amounted to a full exoneration of the corporations.

A law restricting the workday, the committee wrote, would negatively affect the competitiveness of the mills. It would also affect “the question of wages,” which the committee held should be set by the market, as negotiated between labor and capital. In Lowell, the committee said, “labor is on an equality with capital, and indeed controls it…Labor is intelligent enough to make its own bargains, and look out for its own interests without any interference from us.” The committee concluded by expressing confidence that any abuses in the mills would remedy themselves, through “the progressive improvement in art and science, in a higher appreciation of man's destiny.”

The Voice reacted sharply to the report, charging that the political process had been hijacked by the corporations, and accused the committee of distorting the workers’ testimony. When Schouler sought re-election following the release of the report, the Female Labor Reform Association vigorously campaigned against him, likely contributing to his defeat a year later.

Workers in New England had varying attitudes towards the ten hour campaigns.  Some believed that they were the first step in a broader reform movement (see for instance, “One Step”). For others, it was an attempt to simply mitigate the negative effects of the new economic system, the basic premise of which had already been reluctantly accepted. Still other workers, fearing that a ten-hour system would put a limit on their earnings, refused to lend their support to the movement (see “Lowell Girls - Standing at the Gate”).