The Voice of Industry appeared during a period of unprecedented, explosive growth in the textile industry. New, large-scale machinery had come to dominate the production of cloth by 1840, and was being rapidly developed in lockstep with equally new ways of organizing workers for mass production. Together, these mutually reinforcing technological and social changes produced staggering increases: between 1840 to 1860, the number of spindles in use went from two million to over five million; bales of cotton used from 300,000 to nearly a million, and the number of workers rose from 72,000 to nearly 122,000. (The collected pieces in “Manufacturing Power" give a sense of this dramatic expansion).

This incredible growth translated directly into large profits for the textile corporations. Between 1846 and 1850 the dividends of the “Boston Capitalists,” the group of textile companies that founded Lowell, averaged 14% per year. Most corporations recorded similarly high profits during this period. 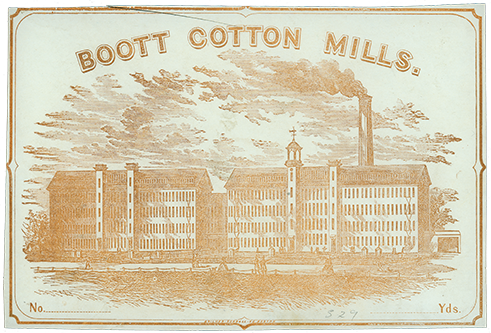 An engraved image of the the Boott Cotton Mills, established in Lowell and incorporated in 1835. By 1846, five such buildings were built along the Merrimack river.

Consenting to be Robbed

The System of Wages

Workers saw none of these gains. Indeed, most saw their positions decline sharply during this period, as the corporations employed fewer workers, and made them tend more machines at faster speeds, for reduced wages.*

Not surprisingly, this gave rise to considerable discontent. Writing anonymously in the Voice as “one of the vast army of sufferers,” an operative protested that while workers now tended “three or four looms, where they used to tend but two,” and produced twice as much cloth, “the pay is not increased to them, while the increase to the owners is very great. Is this just?”

Another, writing in 1845, observed that while the profits of 11 Lowell mills had doubled from the year before, the workers were being paid 12.5% less. “This is the natural result of the state of things in New England," she concluded, “the more wealth becomes concentrated in a few hands, and the poorer the great mass becomes.”

In the previous decade, the power of the corporations had been limited, since disillusioned workers could leave the factories and return to their nearby rural homes. By the early 1840s, however, many New England farms had been crushed by a severe economic depression, leaving workers with no alternative to harsh factory life. For the first time, a permanent “factory population” arose in Lowell.

Measures aimed at increasing worker discipline became suddenly more effective. Corporations colluded to increase the workweek and the number of hours in the workday. They maintained ‘blacklists' that prevented discharged workers - fired, in many cases, for trivial reasons - from finding employment at other mills. A “premium system” was adopted in which supervisors were paid bonuses for pushing operatives to produce more. As a result, by the mid-1840s, workers were spending twelve to fourteen hour days each day in factories that were often overheated and poorly ventilated, doing dreary, exhausting work. While they often wrote about being treated by mill owners as “living machines,” the reality was much worse - unlike their inanimate counterparts, workers could be forced to produce more, by way of pressure and intimidation. 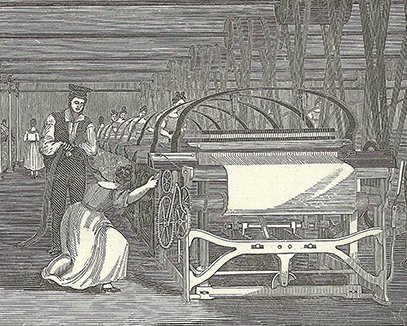 The Condition of the Operatives

The President in Lowell

Are the Operatives Well Off?

Life of the Operatives

The Most Important Question

Our Influence is Felt

A woodcut from 1836 of a weave room, showing women working at power looms, with male foreman in center.

the cost of “labor-saving" machines

While workers bitterly condemned this exercise of power, they were even more alarmed by another, overarching feature of the new economic order: the disconnect between the liberating potential of what was sometimes called ‘labor-saving’ machinery, and the way these inventions were used to instead to increase output. “With such gigantically increased means of production,” asked one reformer, “would it not be supposed that the Laboring Classes would be rendered more comfortable?…Certainly, but directly the reverse is the case.”

This was not the attack of the caricatured, machine-sabotaging, “luddite.” Machinery, workers argued, should be developed and applied with the aim of freeing people from undesirable work, allowing them more time to cultivate and develop their talents. Instead, they watched with dismay as their work increased, and was fragmented into narrow, routine tasks, which left them physically and mentally debased. “Compared with their employers,” wrote a worker in the Voice, “[workers] are as a class sinking day by day into a still deeper degradation.” Another observed that there was now  “machinery enough in New England to do the work of five times its present population performed in the old way,” but that, “the consequence is we are nearer starvation.”

These workers were also criticizing the way costs and benefits were understood and tallied in the new, profit-driven, economic system. For the factory owner, the definition of “cost" was restricted to monetary expenses; similarly,  “benefit" was defined narrowly to mean physical output. Any other costs associated with production - such as the mental deterioration suffered by workers from performing repetitious, mindless tasks - was considered irrelevant in this calculus of “profitable” work. 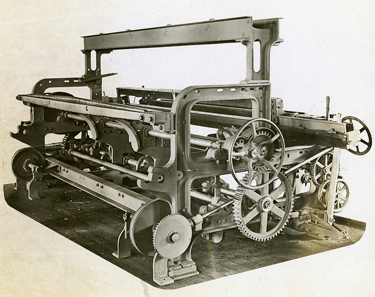 A gelatin silver print of the Power Loom, a key technology that enabled corporations to integrate previously seperate steps in the production process, leading to a massive expansion of the textile industry (1900).

While the rise of a permanent factory population increased the power of the corporations, it also allowed for a more lasting, permanent response to that power.

In January 1845, 12 factory operatives organized the first union of female factory workers in America, the Lowell Female Labor Reform Association. Six months later, its membership had grown to 500. Under the guidance of the young labor leader Sarah Bagley, and with the Voice of Industry as its herald, the Association tirelessly campaigned to convince the public of the need for reform in the mills. It published a series of widely distributed articles called  “Factory Tracts,”which documented the deteriorating conditions in the mills, and provided “a true exposition of the Factory system and its effects upon the health and happiness of the operatives." The association would go on to become a leading organizing force in the Ten-Hour Movement in Lowell. (For more on the Association, see the section, “The Rights of Women").

* In most cases, workers' total earnings stayed the same during this period, and wage cuts took the form of reductions in “piece rates," the amount paid for each piece a worker produced. At this lower rate, their total earnings were maintained by producing more output; which, for the most part, was accomplished by pushing operatives work harder. Workers were made to tend more machines (a pratice  referred to as the “stretch-out") at faster speeds (referred to as the “speedup"); they were, in other words, being made to perform more work for less money.  See “A Few Cents More" in the Voice, and more generally, Norman Ware's Industrial Worker (1840-1860), pp. 112-118.

a note about the name of this section

“Political Economy” was the term used for the study of the new, market-based capitalist economy that was rapidly expanding in the early 19th century. Political economists were not only interested in how markets worked; they were also deeply concerned with the question of whether markets were morally acceptable ways of producing and distributing goods. They paid close attention to social and historical processes, with a view of understanding the nature, logic and trajectory of capitalism.

By the turn of the 20th century, these moral and social questions were removed entirely from the study of the economy. “Political Economy" was transformed into “Economics,” an allegedly value-free, mathematized discipline in the mould of physics. The new economics  was concerned primarily with questions of “efficiency,” leaving judgments about morality and distribution to ‘softer’ subjects like philosophy and sociology.

While modern economics has enthusiastically embraced this “neoclassical” approach, political economists like Adam Smith, John Stewart Mill and Alfred Marshall would have expressed deep unease and skepticism about separating the workings of capitalism from judgments about its moral acceptability.

(For more about the shift to ‘neoclassical' economics, see Robert Heilbroner's excellent book The Worldly Philosphers.)