They who work in the Mills

The Problem of
the Age

While the new economic order was becoming increasingly entrenched in the 1840s, many industrial workers were convinced that it could still be pushed in a more humane direction. Their optimism fueled a number of reform movements that aimed to remedy the many negative effects of the system; effects workers argued were deeply rooted in selfish acquisitiveness.

The reform movements of this period can be divided into three groups: Associationism, Land Reform, and the Cooperation. All three were represented in the Voice, though the paper was perhaps most sympathetic to the third.*

The Associationists believed that the problem with the new industrialism was its underlying ethic of selfish, competitive individualism. They sought to create new societies based on principles of cooperation by establishing self-contained utopian communities in the countryside. Many such communities were actually built during this period, and enjoyed varying degrees of success (included here are reports of these efforts in England, and a about the “Hopedale Community,” built Worcester County, Massachusetts, in 1842). Some of these initiatives were based on the ideas of the French philosopher Charles Fourier, whose blueprint for an ideal community called for 1,600 people to live and work in specially designed buildings, called “phalanxes.” Fourier inspired American reformers Albert Brisbane and Horace Greeley, whose writing appears in the Voice.**

he Land Reform Movement was based on the conviction that societal injustice was tied fundamentally to the ownership of land. Land Reformers campaigned for limits on how much land any one person could own, and fought for the equal division of public lands. They drew inspiration from the past, animated by visions of small, self-sustaining townships, and were driven by the idea that it was unjust to treat land as anything other than a common resource. “Three-fourths of mankind find themselves in a world where there is plenty of soil to cultivate, mines to delve, and water power to be turned to account, and yet they have no right by the laws to touch anything,” wrote one reformer. “They are thrown into the labor market with their bare hands, to make the best bargain they can. Gracious Heavens! This is not fair play.”

The Cooperative movement shared many of the views held by the Associationists, but questioned their utopian schemes and the impulse to withdraw from society. Instead, these reformers focused on building institutions based on mutual aid and solidarity within society. Among other things, this involved creating cooperatives in which workers pooled funds and bought goods in bulk. The goal was to sell the goods to workers at cost, without the interference of  “middle men,” who, they wrote, “do nothing themselves, and subsist upon the food of others.” Perhaps the most successful of these initiatives were the “Protective Unions” of Boston, first established in October 1845 by a group of Boston mechanics. The Protective Union, which became the model for hundreds of other such unions, also provided health insurance and pensions to its members. Included here is a series on the workings of this Protective Union, which played a large role in the spread of the consumer and producer cooperative movement. 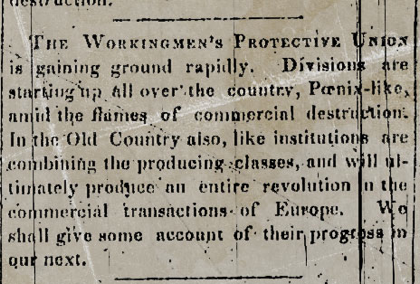 A note about a Protective Union, published in the Voice on November 11th, 1846.

*This division of reform movements follows the historian Norman Ware's categorization. For more, see his book, “The Industrial Worker", Chapters 11-13.

**Fourier’s views inspired the founding of American utopian communities in Ohio, Texas, New Jersey and New York. Another prominent member of this group was the Welsh industrialist Robert Owen, who had built a version of his own model cooperative enterprise in Scotland in 1799 called “New Lanark". Owen had plans for a community in Indiana called “New Harmony,” which never materialized.