The women who came to work in Lowell were largely daughters of propertied New England farmers, and between the ages of seventeen and twenty-five. During the early period, they came to the mills of their own accord, and for various reason: some came to help a brother pay for college, others for the educational opportunities offered in Lowell, some came simply to earn supplementary income.

Employment in the mills provided an unprecedented opportunity to work outside the home, free from the controlling influence of fathers and husbands. Despite wages that were just half of those earned by their male counterparts, * many women were still able to attain economic independence for the first time. Although factory life would soon come to be experienced as oppressive, initially it enabled these women to challenge the myths of female inferiority and dependence, and prompted them to question lives of idle, “genteel leisure,” (which was held up as an ideal in the 1800s). By 1840, the corporations had recruited over 8,000 women, or “Factory Girls” as they called themselves, who made up nearly seventy-five percent of the mill workforce. 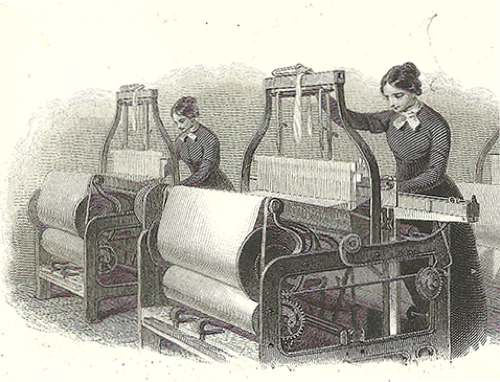 An 1860 engraving of two women working at power looms.

life in the boardinghouses

Upon their arrival in Lowell, to protect them against “immoral influences,” unmarried women were made to live in company boardinghouses. Here, a “housemother” (usually a widow) was appointed to enforce strict moral codes and regulations that governed every aspect of their lives: doors were locked at ten, curfews enforced; visitors limited and church attendance was mandatory. Initially well maintained, the boardinghouses quickly became unkempt, under-ventilated and overcrowded, with six or seven women sharing rooms intended for just three. It was to these quarters that the operatives would return after long days in the mills. And it was here they read books, played music, and wrote letters, essays and poetry. In the process, they developed strong, close-knit communal bonds.

The Rights of Women

May the Day Come

How to Treat a Wife

Replies to
the Spectator 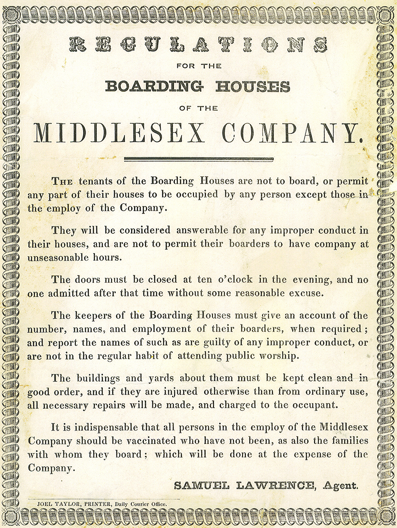 Regulations for residents of the boarding houses of the Middlesex Company (1846). These represent only a few of the many rules and regulations that had to be followed.

The sense of community that arose from working and living together contributed directly to the energy and growth of the first union of women workers, the Lowell Female Labor Reform Association. Started by twelve operatives in January 1845, its membership grew to 500 within six months, and continued to expand rapidly. The Association was run completely by the women themselves: they elected their own officers and held their own meetings; they helped organize the city’s female workers, and set up branches in other mill towns. They organized fairs, parties, and social gatherings. Unlike many middle-class women activists, the operatives found considerable support from working-class men who welcomed them into their reform organizations and advocated for their treatment as equals. (Articles about the Association and its activities can be found in the “Political Economy" section).

One of the most important women labor leaders of this period was Sarah Bagley. Born in Meredith, New Hampshire, Bagley worked as a common school teacher before moving to Lowell in 1836 to work in the mills. She worked in the factories for nearly nine years, and spent much of her time conducting a free evening school for women workers and writing. Increasingly alarmed by the worsening conditions in the mills, she began playing a leading role organizing the women, soon becoming the first president of the Association, and briefly assuming the editorial chair of the Voice. (Her writings, which appear in various sections across this site, are signed “S.G.B.”)

the rights of women

It's no surprise that the Voice was particularly vocal in its support for women's rights. Under Bagley's supervision, the paper ran a regular “Female Department," which was “devoted to the females of our country and through which they shall be heard." In her introductory piece, she invited women to write for the Department, declaring that it was “devoted to women's thoughts [and] will also defend woman's rights." (This piece, and others from the Female Department can be found in the section, “The Voice").

The writing in the Voice on the issues of marriage, suffrage, and equality is uncompromising.  “It may be," wrote one woman, “that most women are so dwarfed and weakened, that they believe that dressing, cooking, and loving... make up the whole of life." She continued, addressing the men who oppressed them: “You boast of the protection you afford to women. Protection! From what? From the rude and disorderly of your own sex - reform them, and women will no longer need the protection you make such a parade of giving." Another woman looked forward to a day “when females will hav their proper station in society, when they will no longer be considered the plaything and slave of men."

The paper also published pieces questioning norms of physical beauty, and warning about the dangers of the created and  “superfluous" wants of fashion. In a republished piece called “The Ladies of Italy", one woman wrote: “It is astonishing that our ladies should persist in that ridiculous notion, that a small waist is, and par necessita must be, beautiful," which, she continued, was “a standing objection against the taste of our women." 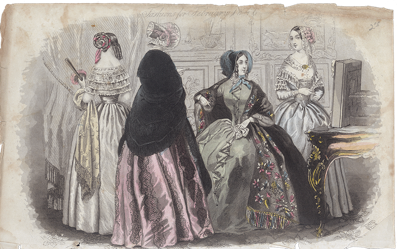 *Women were offered wages ranging from $1.85 to $3.00 a week, the highest offered to female employees anywhere in the country. This seemingly high wage scale represented a considerable saving for the mill owners, since male mill workers cost them twice as much. By employing 75% women, the corporations were able to claim a considerably lower overhead.